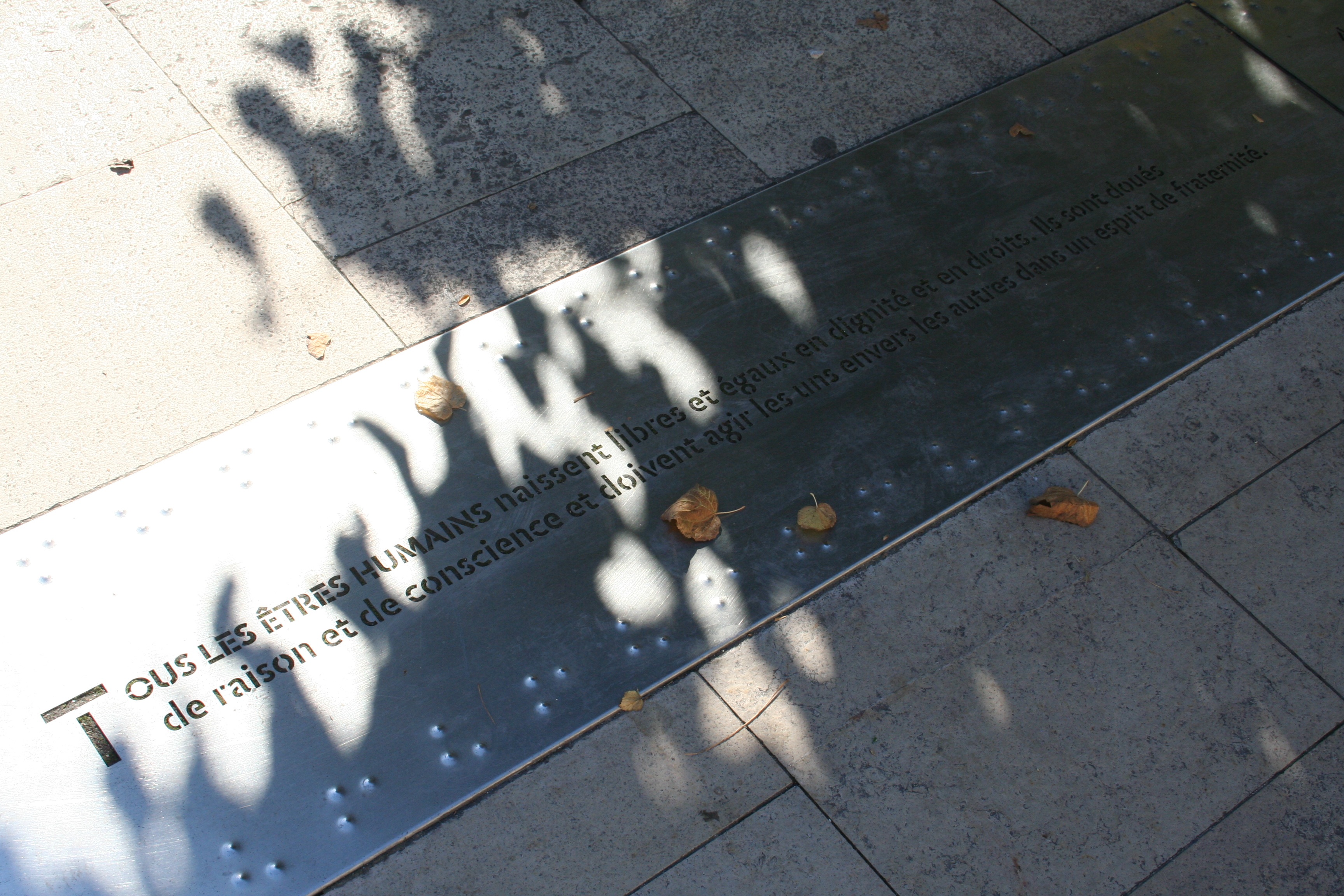 Three Interfaces of Exchange around a Visible/Articulable Art

In France, public artworks that call on literature at once raise the question of the connections and divisions between words, public places and public space—implying a reflection on the convergence and divergence of what we can call three interfaces of exchange: artistic, spatial or urban, and political—but also the question of the French specificities regarding the distinction and hierarchy of the arts. An initial interface of artistic exchange emerged the moment artists decided to transpose words and literature into public places, flouting earlier conventions on the separation of the arts and thus revealing tensions between them (until then, literature, i.e. the written word, had been confined to the literary set, was deemed to govern the other arts and was at best accepted in the form of inscriptions accompanying artworks). As for spatial/urban and political interfaces of exchange, they seem to be interlinked. For indeed, what interest can an artist have in transforming a literary text into state-sponsored public art if its new mode of presentation does not give rise to differences that oblige the spectator, who has now become a reader, to rethink the relationships between public places and space, and the role of fiction in its capacity to redefine community? Contemporary public art inscribes its own difference within the flow of matters of common interest. It bears witness to the efforts that our societies must make vis-à-vis their traditional political fictions (related to identity and nation), by questioning multiplicity, genres, languages, superfluous requirements (consumption) and the legitimizing processes of public affairs. Literature is very much involved in such a visible/articulable art.

Previous relationships of the visible and articulable

But before positing such a relationship between literature and art, it must be acknowledged that literary fiction can, in principle, be combined with visual art. Hence a fundamental difficulty that requires us to specify the form in which the artistic relationship is conveyed. With respect to conceivable reconciliations between the autonomous artistic practices of literature and the visual arts, we can observe that the relationships envisaged between them in public art—whether they be homogeneous or heterogeneous—juxtapose figures, forms, images and stories that force the various arts into assemblages. Yet the more homogeneous and uniform they are, the more consensual they seem to be; the more heterogeneous and fragmented they are, the more dialectical differences they display and the more these conjunctions generate the possibility of redefining genres, divisions and community (including the literary and artistic). It is consequently interesting (or worrying) to observe that in France such a composition, such a possibility of creating archipelagos of practices, has never been theorized and has produced only a few individual works.

As regards the previous absence of a relationship between them, precisely as a product of the cultural tradition of the French academies, we cannot help observing the almost insurmountable gap that separates the articulable and the visible in the arts. In the case of France, such a gap is established, legitimized and institutionalized in order that certain academic dictates and hierarchies be strictly observed. For example, this gap is assured by a consensus on the protection of literary value, understood as a fundamental cultural value, to the point that some people occasionally prefer writings no longer read, relegated to some sort of sanctuary, over a new literature that might conceivably exist beyond the “reserve” of the accepted referential framework. As long as we claim or take on the role of guardians of such a cultural history, the relationships between the articulable and the visible can only be envisioned as an impossibility or an instance of domination. The text must be regarded as sacred and the rest as inferior.

A visible presence of the articulable?

Imagine now that a restructuring does take place, that a disruptive poietic force acts upon existing artistic hierarchies and produces the desired effect of confirming the existence of an interface of exchange between the arts. We can then embark on an analysis of the second interface of exchange: the presence, in the public realm, of art comprising literary texts and works.

Here, too, we must take into account another facet of cultural history. Besides the historical primacy of the visual arts—and sometimes music—in the public sphere, two other elements need to be considered. The first relates to the obvious fictional vocation of public art in public space. Since we are discussing the relationship between literature and the visual arts in the public realm here, we can of course cite numerous novels, poems and songs that, paradoxically, do not simply attest to the public presence of art but also celebrate its virtues in terms of the use of urban space to represent political unity. The second element concerns the role of the French state, which has never hesitated to ascribe aesthetic functions to public power as a means of upholding a certain imaginary notion of national unity. The state relies on or even incites emotions to strengthen or justify its existence. Yet, for a long time, it was content to use symbols, celebrations, ceremonies, acts of remembrance and monuments, placing aesthetics in a position to shape social bonds.

But this brings us to three successive problems that deserve consideration.  The first derives from the fact that by giving over public spaces solely to the aesthetic choices made by the authorities, they have quickly become the centre of a power struggle. Between the state and commerce, a lengthy public battle has been fought that has tied these places to consumption (advertising and words). The second problem is linked to the evolution of modern art—from Stéphane Mallarmé to Rodney Graham, for example¾which, in uncovering these difficulties (words in painting, letters in drawing), may have attempted to exert its power over these places, without employing any figurative form. Having dismissed classical statuary and beauty, modern art understood the importance of defying artistic divisions and promoted original visible/articulable forms. It quietly appropriated the work of poets, the spatiality of the poem and of poetic exercises on the relationship between space in and of literature, and the space of language. Finally, the third problem stems from the possibility that then arises for a broader bias. By beginning to transform literature into public art, artists and those who commission art introduced the uncommon into public places. They simultaneously opened up both commercial communication—by using letters to criticize propagandist slogans—and the presumed forms the community takes on in unitary public fictions.

Acts of decoding by the spectator/reader

We now have an idea of the complexity of the question of the relationships between literature and the visual arts, in that different social activities and conflictual relationships between these activities are interconnected, even though they do not necessarily come into play at the same time. Nevertheless, it may come down to the formula according to which public art, whether visible/articulable art or not, must make efforts to distance itself from history.

In France, the majority of public artworks that comprise words (but not literature) merely transpose art into the realm of consumption, at the same time reducing aesthetic pleasure to that of the senses. There are numerous examples of public art that have contributed to the tedium of an era devoted to visual passivity and imposing a standard form on the body. These are works that aestheticize public space, as in certain pieces by Fabrice Hyber. In this regard, I share the view of Peter Sloterdijk who, in his book La Compétition des Bonnes Nouvelles,[1] asserts that we have entered a phase of even greater aestheticization since electronics engineers and technicians invented new sound and visual immersion techniques. Ever since we have been using and abusing these inventions (words in neon lights, flashing words, etc.), it can readily be observed how various public festivities, and even cities themselves, have been transformed into immense pools of acoustic and visual emotion.

The physical body of spectator-passersby remains a central question here. The indifference with which they may receive already familiar works does not afford them a sense that they can change their habits. The physical spectator-passerby should also be understood as a metaphor for the body politic or the community. It is here that public artworks with literary content, by associating the visible with the articulable, can perhaps convert spectator-passersby into spectator-readers, through the surprise of having to register multiple meanings, the collapse of uniformity and a series of singular events and multiple scenes giving rise to new conceptions of the common.

A certain number of works must therefore be able to exist in our societies that, at their core, produce dislocations, cross the boundaries that define identity, resist the domination of a common meaning shaped by a common aestheticization and undoubtedly create new public scenarios. These would be disruptive works (for example, the works of Michel Goulet, Malte Martin, Robert Milin and Patrice Hamel) which would expressly involve political practices in terms of contemporary public art. They would demonstrate a particular relationship with the public by attempting to allow it to interrupt the course of events—artistic ones, to be sure, as well as public, and perhaps even historical.

Once we place artistic, spatial or urban and political interfaces of exchange at the crux of public art, notably through the creation of visible/articulable artworks, it is not only a new set of divisions that emerges but also possibilities for transformation. We think less of using literature (in the traditional sense) to oppose the debasement of language and boulevard communication (Mallarmé), or to fret over the state of public space or the uniform layout of a page on which words flow. Rather, we think of how the text, conceived as a means of addressing the other, flows between artistic disciplines. We think of the text as a work of language, a work intended to enable us all to try to express ourselves, to articulate our relationship with the world and, finally, as a collective writing practice associated with the visual arts.